A suspect identified as Aminu Bala who allegedly raped and killed his sister-in-law has confessed to the reason why he committed the heinous crime. 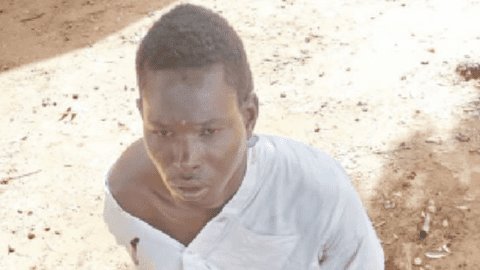 Aminu Bala who allegedly raped and killed his sister-in-law

The incident according to reports happened at Maradun Local Government Area of Zamfara State. Bala confessed, in an interview with The Punch, to the crime stating that he did it because of his brother’s perceived hatred towards him.

Read excerpts from the interview below:

Where are you from?

I am from Damaga village, Maradun Local Government Area in Zamfara State. I am a labourer. I did not attend any school.

You have been arrested for allegedly raping and killing your elder brother’s wife. Is it true?

Why did you rape and kill your sister-in-law?

I did it because I was not on good terms with my elder brother, Iliyasu Bala.

I have not been on good terms with my elder brother since he sacked me as a labourer at the place where he works as a bricklayer. There was a disagreement between us and as the person heading the place, he sacked me. Since then, I have been jobless.

Why didn’t you talk to your brother instead of killing his wife, who had nothing to do with it?

I can’t kill him because he is stronger than me. I cannot face him. I expressed my anger by killing his wife because of what he did to me.

How did you feel after raping and killing an innocent woman?

I felt sad but I also felt I taught my brother a good lesson for sacking me from the job I had. I know I would be punished for what I did.

How do you feel now that you have been arrested?

I do not feel anything. All I know is that I will face the consequences of my action. I was shot in the leg by the police who came to arrest me.

Don’t Date A Girl Who Can’t Pay Her Transport Fare To Come See You – Pretty Lady...

Man who married single mum discovers she cheated on him...