Following a five-day visit to the southeast of Sierra Leone, Hon. Kandeh Yumkella – leader of the National Grand Coalition (NGC) in parliament in Sierra Leone, has completed his coronavirus disease sensitization tour. The visit took him and party representatives to Bo, Kenema, Kailahun, and culminated in Pujehun. 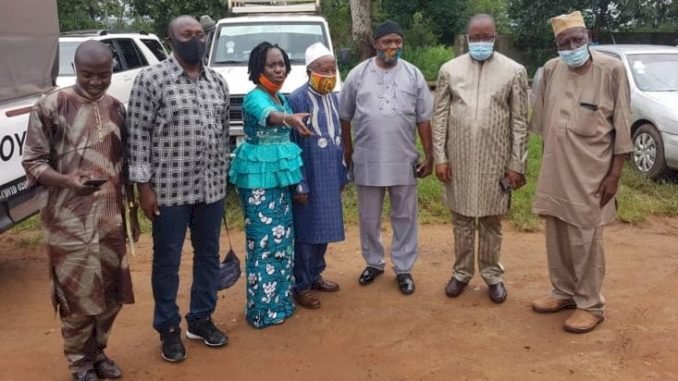 In Pujehun, and in his capacity as chairman, Hon. Yumkella attended the Ministry of Planning and Economic Development (MoPED) parliamentary oversight committee meeting hosted by Dr. Francis Kaikai, minister of planning and economic development.

The meeting was attended by the Minister of Information, Minister of Youths, Minister of local government and Deputy Minister of Economic planning Development and other senior government officials, parliamentarians, paramount chiefs, and local stakeholders.

During the meeting, Dr. Sandi, deputy minister of health announced that Pujehun has recorded zero COVID-19 cases for 19 continuous days. Out of the 7 confirmed cases they have had, 5 have been discharged after testing negative.

In Kailahun, the DICOVERC coordinator Mr. Morie Feika informed the NGC delegation that the district currently had no COVID-19 positive case. “Kailahun District seems to have put into practice the vast knowledge and experience garnered from the fight against the Ebola virus disease scourge which ravaged the district years ago,” said Hon. Yumkella.

In his briefing to the NGC delegation, Mr. Feika expressed profound happiness over the delegation’s visit to the district. He noted that the NGC is the first political party to visit them to learn more about their Command Centre. “We have been resilient throughout this period and we remain committed to the fight against the dreadful virus.” He further noted that only a few people are currently in quarantine in the district and will complete their quarantine periods in about a week. “We remain hopeful that they will show negative after all the tests are completed.”

“We are pleased to welcome the parliamentary oversight committee and to see the leadership of the NGC party visit our centre,” he said noting that the fight against the coronavirus disease is a fight we must all fight for the good of all. He commended Hon. Yumkella for his tireless efforts in visiting the region to see for himself the work they are doing.

In response, Hon. Yumkella reiterated the message that the disease is real and remind all to wear their face masks. “Our collective efforts are required as Sierra Leoneans regardless of your tribe, party, region, or political party.” He called on the Kailahun DICOVERC to continue their positive strides and prayed other districts will speak of such awesome success stories.

Coordinator Feika further applauded the Kailahun District Descendants Association (KDDA), Save the Children and other NGOs who have offered financial support to the centre underscoring they are yet to use funds disbursed to them by the central government.