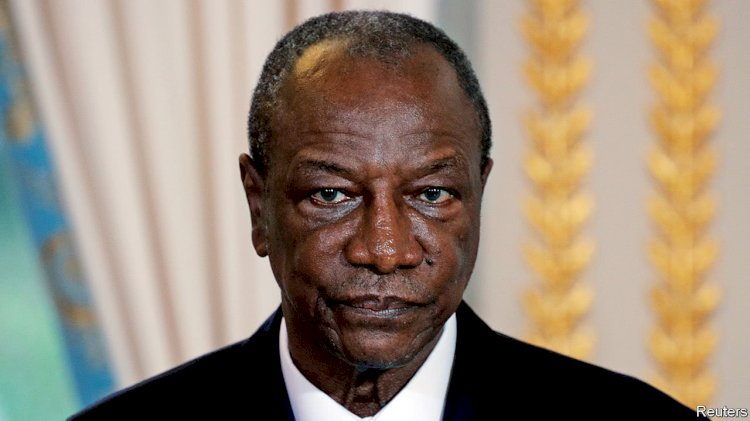 His main opponent Cellou Dalein Diallo, -- at the forefront of protests against a third term for Conde --  was credited with 33.5 percent of the vote.

"Long live democracy, long live peace, may God bless Guinea," Cisse said during a ceremony in Conakry, as Conde supporters leaped to their feet and cheered the president's victory.

The announcement follows days of post-election violence in which around 10 people were killed in clashes across the nation of some 13 million people.

Doubting the independence of the electoral authority, Diallo, 68, had on Monday declared himself victorious before the results were announced -- which triggered confrontations between his supporters and security forces.

GUINEA'S President Alpha Condé wins third term in office with 59.5% of the vote, according to a full preliminary tally from the election commission. pic.twitter.com/bv46EuMzfI

Protesters hit the streets of Conakry again Saturday, and residents of some suburbs said police officers were firing tear-gas canisters to clear them off.

"We're on the street until Cellou Dalein asks us to come home," said one, who declined to be named, referring to the opposition leader.

Diallo told AFP he would mount a legal challenge to the announced election results.

"We are going to protest this electoral hold-up in the street," he said.

"But we are still going to refer the matter to the constitutional court, without having too many expectations".

While Guinea's independent national electoral commission (CENI) declared the provisional tally, the constitutional court must still approve the result. It is expected to do so in about a week.

With his win, Conde is set to govern for another six years, and could potentially run for another fourth term after that.

Stiff opposition to a third term triggered mass protests from October 2019, in which security forces killed dozens of people.

In March, the president pushed through a new constitution which he argued would modernize the country.

The move also allowed him to bypass a two-term limit for presidents.

Guinea is a poor country, despite rich deposits of bauxite, gold, and diamonds, that has known little political stability since independence in 1958.

Conde, a former opposition activist who spent decades in exile, became the country's first democratically-elected president in 2010 and was re-elected in 2015.

But hopes of new political dawn have soured, with rights groups accusing him of veering towards authoritarianism.

Diallo was formerly a prime minister under authoritarian leader Lansana Conte. He ran against Conde in both 2010 and 2015.

Diallo's self-proclaimed victory plunged Guinea into a fresh round of violence.

The opposition says 27 people were killed, and AFP was unable to independently confirm the official death toll of 10.

Five people died Friday on the outskirts of Conakry when a train carrying fuel was attacked after the rail tracks were sabotaged.

In another confusing incident, at least three gendarmes, a soldier, and civilians were killed in a Conakry suburb the same day, according to government officials who declined to be named.

The International Criminal Court's chief prosecutor has warned that the rival parties could be prosecuted after fighting erupted.

"We are... continuing to closely monitor developments on the ground. The violence must stop," Fatou Bensouda said in a tweet.

"I wish to repeat this important reminder: anyone who commits, orders, incites, encourages and contributes in any other way to crimes... is liable to prosecution either by the Guinean courts or the ICC," she said.

The campaign was fraught with tension ahead of the vote. Conde was accused of stoking ethnic divisions for electoral ends, a charge he denies.

Guinea's politics are mainly drawn along ethnic lines: the president's base is among the ethnic Malinke community while Diallo has strong backing among the Fulani people.

Police go after looters, 483 arrested in Lagos, Plateau, Anambra, others