Africa is the world’s most popular destination for Safari. When you think Safari you think Africa. In our travel sector today we present you the best safari destinations in Africa. 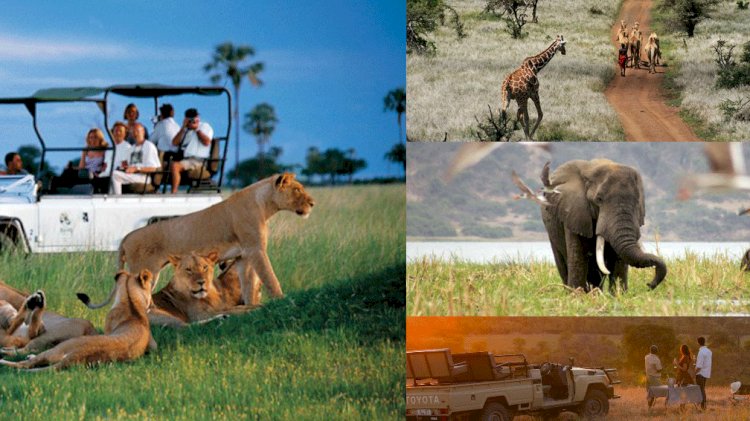 It is expected for there to be best and top ones out of the tens of Safaris in Africa. In case you don’t know what safari means; Safari means ‘long journey’ in Swahili. Today, safari-goers can bypass the arduous up-country trek of yesteryear and be deep in the African bush within 24 hours of Heathrow.

This particular safari spot is one of the most popular Safari destinations in the world also acclaimed by many to be the best safari in Africa Located in the extreme southwest of the country on the border with Tanzania, Maasai Mara National Reserve is Kenya’s quintessential safari destination. Covering over 580 square miles/ 1,500 square kilometers, it is a true wildlife haven. You can spot the Big Five, or keep an eye out for the reserve’s plentiful big cats. In particular, it is one of the best places on the continent to see lions in their natural environment.
Mara’s downside is its popularity, sometimes leading to intrusive clusters of minibusses. For a more exclusive experience, head to upmarket camps in the west. Rough roads and seasonal flooding rule out self-drive for first-timers.
Budget: Options at all price levels
When to go: Cooler and more accessible during the dry season, May-Oct

The Serengeti is arguably the best-known wildlife spectacle on the planet. Everything that applies to the Masai Mara – its northern extension – applies here, from the scale of the great migration to the ease of sighting predators. Except that the Serengeti, at nearly 15,000 sq km, is nearly ten times bigger, which means that its plains are that much more ‘endless’ and there is a greater habitat variety. It also means that visitors are a little thinner on the ground than in the Mara. The center of the park, around Seronera, is often busy but private concessions in the north and west offer more exclusive options.
The Serengeti is much larger than the Maasai Mara, and as such it often feels less crowded. From November to June, the Serengeti acts as the main stage for the dramatic Great Migration. At this time, endless herds of zebra and wildebeest gather to graze, mate, and give birth. Definitely one of the top Safaris in Africa

The Okavango River cuts through the center of Botswana’s Kalahari Desert, creating a unique inland water system that gives life to a huge variety of birds and mammals. In the Okavango Delta, you can view wildlife from land and water – sometimes in a traditional canoe or mokoro. The best time to visit is during the annual flood (which confusingly takes place during the May to September dry season). At this time, the delta’s abundant wildlife is confined to the islands created by the flood, making the animals easier to spot. Highlights include great herds of elephant and antelope; hippos, crocodiles, lions, and cheetah. Many of the birds spotted here are endemic. One of the most exquisite safaris in Africa

This is one of the most beautiful safari destinations in Africa Located in the northeast of the country on the Mozambique border, Kruger National Park is the most famous of all South Africa’s many game reserves. As well as the Big Five, the park is home to the vulnerable South African cheetah, the endangered wild dog, and several elusive small cat species. It is a good option for first-time visitors to Africa, with a wide choice of accommodation options (ranging from basic campsites to luxury lodges). With a well-maintained and easily navigated road system, Kruger is also the ideal self-drive safari destination. Keen birders should plan to visit between October and March. At this time, the park provides a temporary home for more than 200 migrant bird species.

Botswana is a dry land yet, paradoxically, some of its best game viewings are by water. Come the dry season, wildlife throngs the riverfront in the far north of Chobe National Park, where boat cruises pass countless elephants and buffaloes. Lions and hyenas roam the loop roads, while sable is among the many herbivores. Victoria Falls is just a day-trip away.
Further south, the Moremi Reserve protects the eastern fringes of the Okavango Delta, where seasonal waterways lure prolific game numbers from the surrounding mopane woodland. Predators, including wild dogs, are abundant. Boat cruises across the lagoons or mokoro (dugout canoe) trip down the narrow channels offer plentiful big game and birdlife.

Zambia’s top park is generally seen as a destination for the more discerning, thanks to its expert guiding and small, owner-run lodges promoting an all-round bush experience. Nonetheless, South Luangwa is also a top spot for first-timers. Toward the end of the dry season game concentrates in great numbers around the shrinking river and its hippo-choked lagoons, and – with the exception of rhino and cheetah – you can expect easy viewing of a full wildlife spectrum. Night drives allow the thrill of following big cats on the prowl – there is no better park for leopard – while guided walks offer an enthralling ground-level insight into the bush. Indeed, this park is known as the home of the walking safari.

In northern Namibia lies Etosha National Park, a diverse collection of different habitats arranged around a salt pan so large it can be seen from space. This self-drive park is generally arid, and many of the animals here are adapted for life in the desert – including the gemsbok and springbok antelopes. Elephants are common here, and you’re likely to see lion, hyena, and cheetah. You won’t find buffalo or hippo, though – it’s simply too dry. Etosha’s main highlight is its population of critically endangered black rhino. These remarkable creatures are best spotted at the floodlit waterholes of the three main camps, alongside an array of other nocturnal animals.

Zimbabwe’s Hwange National Park covers some 5,655 square miles/ 14,650 square kilometers of land in the west of the country. It is possibly the least crowded of Southern Africa’s major safari destinations, allowing for a heightened sense of adventure and discovery. Hwange’s elephant population is legendary, as are its large herds of buffalo. The lion is often spotted here, too. Above all, the park is one of the best places in the world to see the elusive African wild dog, thanks to the presence of several establish packs. Hwange’s private game lodges offer a variety of different safari options – including walking safaris, horseback safaris, and night safaris. One of the most beautiful safari destinations in Africa.

Bwindi Impenetrable National Park is located in southwest Uganda on the edge of the legendary Rift Valley. This dense rainforest is home to nearly half of the world’s population of mountain gorillas – a critically endangered subspecies with approximately 880 individuals remaining in the wild. Here, you can track the park’s habituated gorilla groups on foot, allowing you to come face-to-face with these fascinating great apes. The forest is also home to chimpanzees, baboons, and other mammals including elephants and antelope. Its birdlife is diverse, with more than 20 endemic species. The park also offers the opportunity to meet the region’s native pygmy people.

The Laikipia Plateau lies at the southern boundary of Kenya’s northern frontier, with dramatic views of snow-capped Mt Kenya to the south. With similar wildlife to that in nearby parks of Meru, Samburu and Buffalo Springs, it comprises around a dozen private concessions, notably the Lewa Wildlife Conservancy, that have joined forces in one enormous conservation initiative. This protects one of Kenya’s healthiest wildlife populations, with elephant, buffalo, and all the major predators in good numbers, plus reticulated giraffe, Grevy’s zebra, and more than half the country’s black rhinos.

Laikipia offers an exclusive Kenya alternative to the Masai Mara; lodges – some very imaginative – tempt guests with everything from camel trekking to fishing. It has become a pioneering area for ecotourism, with many properties owned by the local community. The high altitude means that large areas are malaria-free and usually cooler than the Mara.

10 Reasons Why You Should Visit Sierra Leone